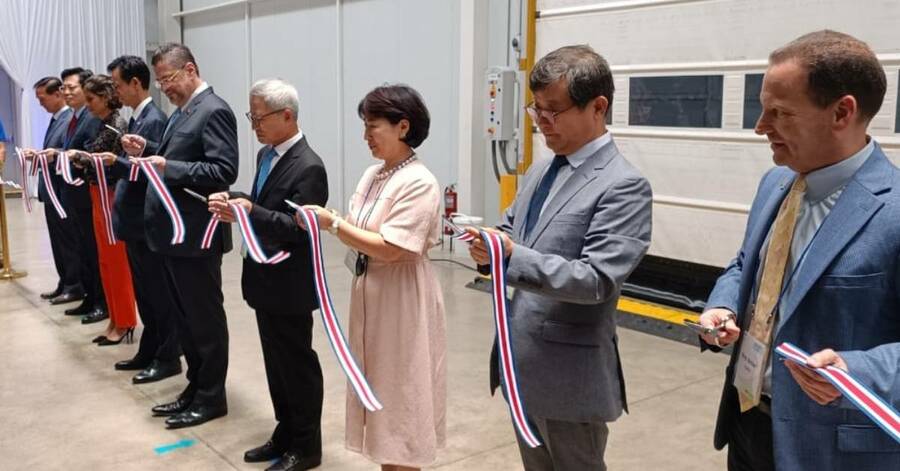 Cartago, Costa Rica. August 18, 2022. The Korean company, Global SAE-A Group, leader in yarn manufacturing and one of the largest apparel manufacturers in the world, celebrated along with President Rodrigo Chaves, the Minister of Foreign Trade, Manuel Tovar, the Managing Director of CINDE, Jorge Sequeira, and the South Korea Ambassador, Kim Jin-Hae, the inauguration of the second yarn manufacturing plant located in Coris de Cartago.

“In seven years, since Costa Rica was chosen in 2015 to install one of the more than 40 factories that it has in several countries in the world, the company has been able to provide work to hundreds of people and thereby contribute to the quality of life for many families from Cartago, and also the country’s progress,” stated Rodrigo Chaves, the President of Costa Rica.

SAE-A began operations in Costa Rica in 2015 to manufacture high quality yarn. Today it has 400 employees in the country and plans to hire at least 200 more people during the upcoming months. This expansion has to do with a second plant of the three buildings that SAE-A plans to build. The third location is already in the development process and the company plans to create more in Costa Rican territory.

“Seven years ago, we decided to invest in Costa Rica due to the political-social stability and high quality of human resources and I believe that the investment has been a success. The construction of the second plant is part of the investment plan of US $150 million in national territory, which includes a third plant that is scheduled to end its construction stage in 2023. This second plant is an environmentally friendly building that was built with a storm water re-use system and Leed Silver certification from the U.S. Green Building Council. I would like SAE-A to continue its development in national territory, not just by building a fourth plant, but also by building a recycled yarn manufacturing plant that is adapted to the global sustainability trend,” commented Sang Soon Han, President of SAE-A Spinning.

SAE-A Trading, a subsidiary company of SAE-A Group, was established in 1986 and has become a major apparel manufacturer and exporter in the world. Currently 60,000 employees produce 2,600,000 items daily in 40 plants located in 10 different countries in the CAFTA (the Central America Free Trade Agreement) regions and Asia. SAE-A Spinning provides yarn for these items.

SAE-A Spinning produces yarn daily thanks to the work and talent of Costa Rican citizens who work with leading edge technology. This yarn is sent to apparel manufacturing plants to produce the end product for brands such as Walmart, Kohl’s, GAP & Old Navy, and Carhartt.

The Minister of Foreign Trade, Manuel Tovar, appeared pleased with the expansion of the Korean company in the national territory and mentioned: “After 7 years in Costa Rica, the history of SAE-A Trading has been marked by sustained growth. The company in the light manufacturing sector has focused on producing cloth and apparel production processes from spinning to weaving, dyeing, and even sewing.” In addition, he indicated, “SAE-A Trading has become a major ally for our country and, with the second plant, will provide 200 new jobs in the upcoming 12 months for Costa Rican citizens. This translates into well-being and development for the population. We are celebrating this news and the contributions that it will make to our economy.”

Eric Scharf, Chairman of the Board of CINDE, celebrated the growth of SAE-A in the national territory: “This company is an example of success for our strategy and a huge opportunity that Costa Rica has to attract investments into other regions in the country due to the nearshoring and friendshoring trend, where companies attempt to be closer to their markets, mostly North America or allied countries that demonstrate political, social, and economic stability.”

The establishment and operation of SAE-A Spinning in Costa Rica was a major factor for the company since it became the first one in the industry in performing vertical integration by developing all of the production processes running from spinning to weaving, dyeing, and even sewing. Currently, the company’s estimated production is 18 million kilos per year.

For several months, the company sought a large variety of profiles such as operators, supervisors, mid-level managers, and maintenance supervisors. The company is seeking staff members with an academic degree running from primary school up to technicians and engineers in the area of mechanics, electronics, and other specialties. Anybody who is interested in joining the company may send their resume to the following email address:  reclutamiento@saeaspin.com

About Global SAE-A Group
Global SAE-A Group, with its headquarters in Seoul, Korea, is a company that creates and trades apparel that is recognized worldwide with more than 60,000 employees, 24 offices, and 40 plants in 10 countries in the world. It is currently exporting its products for the most important fashion brands in the United States and Europe.