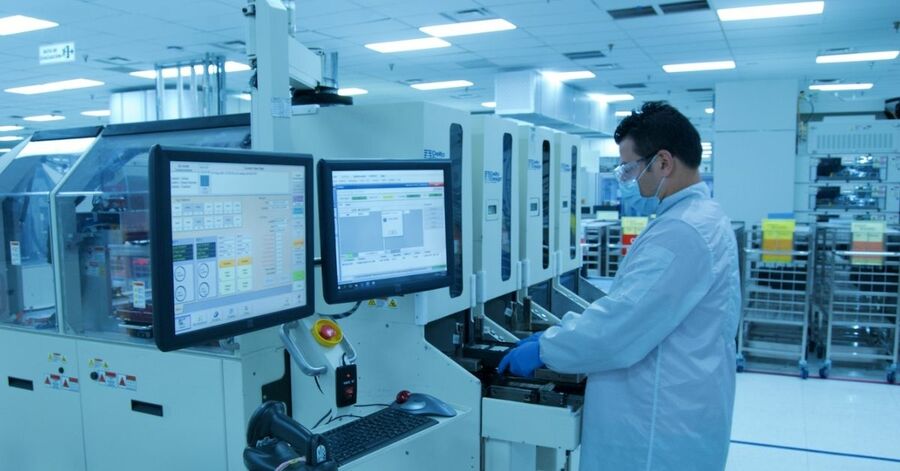 September 30, 2021. Close to the 25th anniversary of Intel announcing its arrival in Costa Rica, the company's new Assembly factory entered into operations and has already marked its first completed Assembly and Testing process export; exports that undergo only the Testing process have been carried out since April 2020.
This first export corresponds to a high-capacity product destined for the large-scale market, such as server farms (groups of servers connected to each other, to process large amounts of data); these products will have global destinations. This achievement became possible after completion of the Assembly process installation and certification, which took 48 weeks.
Max Ramírez, Manager of the Assembly and Testing Factory, stated, “This is, undoubtedly, cause for celebration. Once again, we have a complete Assembly and Testing process, now focused on the server segment. Today, we are initially capable of incorporating with production, and we will work to continue growing for the remainder of this year and years to come.”
Carlos Alvarado, President of Costa Rica, stressed that the start of exports from the complete Assembly and Testing process, "confirms that the country has developed an investment climate that provides world-class companies with the conditions necessary to execute complex processes and export to multiple markets around the globe, thanks to our solid network of free trade agreements, as well as the high quality of our human resources and the solidity of our democratic institutions." President Alvarado highlighted that, together, these elements make our country a reliable partner in long-term business relationships, such as the one that has united us with Intel for almost a quarter of a century, and that encourages reinvestment and business growth.
For his part, Andrés Valenciano, Costa Rican Minister of Foreign Trade, was pleased with the news and stated, “Costa Rica has established itself in Latin America as an ideal economy and platform for exporting high-quality goods and services to the world’s primary markets. Reflecting on this, today we celebrate the first complete Assembly and Testing process export for Intel. In addition, this demonstrates Costa Rica’s continued presence as an optimal ally for foreign companies that seek successful, safe, and innovative production operations.”
The plant, which measures 26,000 square meters (280,000 square feet), is located on the company's campus in San Antonio de Belén and employs state-of-the-art technology, connected with high capacities aimed at prediction, robotics, and self-management, thus boosting industry 4.0 in the region.
In July, Intel Corporation announced that its total investment in new operations had increased to $600 million – $250 million above the $350 million reported in December 2020. Driving this investment growth: the decision to accelerate the ramp-up of assembly and testing operations, to support both new customer demands and growth of existing operations in Costa Rica.

These operations are part of Intel's organization on Manufacturing, Supply Chain, and Operations, which does similar work in Europe, the Middle East, Asia, and the United States. Once the silicon wafer manufacturing process is complete at Intel factories, they are cut and sent to a testing and assembly facility. Each chip is assembled in a package that provides protection and enables the chip to connect with other components. Finally, its functionality is tested.

At this time, these newest operations already employ more than 1,000 direct and indirect employees, with about 100 open positions remaining. Requirements may be consulted only at www.intel.com/jobs.
New employees undergo a training process upon entry, in technical aspects, occupational health, and company culture.

Ileana Rojas, Intel General Manager in Costa Rica, indicated that, “at this time, our existing infrastructure, synergy with operations already in place, talent, the free zone regime, and legal certainty have offered Intel favorable conditions for expanding our Costa Rican operations. The country must continue promoting its competitiveness, as occurs throughout the world."
Intel in Costa Rica: High-Value Operations
Intel has approximately 2,900 employees and creates more than 4,000 indirect jobs. The company's high-value activities are divided into three major centers of excellence:
1. A Research and Development Center (R&D): Currently, the largest and the greatest exporter of these types of services, dedicated to the design, prototype, testing, and validation of integrated circuit solutions and platforms; 30% of the workforce is employed here.
2. A Global Services Center: Designs, executes, and transforms multifunctional business processes on a global level in Finance, Human Resources, Information Technology, Sales and Marketing, and Supply Chain. Another 45% of the workforce is employed here.
3. Processor Assembly and Testing: 25% of the organization's Manufacturing, Supply Chain, and Operations team is employed here, where some of the corporation's main servers are assembled, tested, and packaged.​
In addition to its operations, Intel also invests in the country and its people. With skills-based volunteering, they have brought science, technology, engineering, art, and math (STEAM) to hundreds of students across the country.