News Evolution Free Zone to Create 20,000 Jobs Over the Next 15 Years 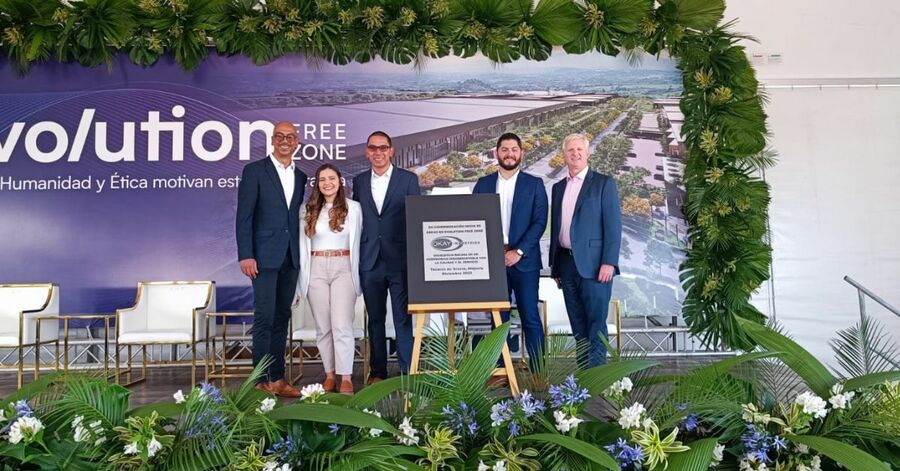 Alajuela, Costa Rica, December 2. Over the next 15 years, the Evolution Free Zone – a new free trade zone in Tacares de Grecia and which today, broke ground on infrastructure and building construction – will create some 20,000 quality jobs that will benefit the inhabitants of Alajuela, San Ramón, Grecia, Atenas, Naranjo, Palmares, Poás, Zarcero, and Valverde Vega, among other areas of the country’s western region.

CODE Development Group, which is operating with 100% national capital and has extensive experience in the construction and administration of Industrial Parks and Free Zones in Costa Rica, will invest US$50 million into Evolution’s first phase; the estimated total investment is $200 million. This next-generation smart park, where innovation, technology and sustainable development will serve as fundamental pillars, will be developed on 100 hectares (250 acres) of land adjacent to Route 1.

The principles of vision, humanity, and ethics motivate the creation of this free zone, which aims to develop the the western zone of Alajuela province and attract companies in the spheres of high technology, advanced manufacturing, life sciences, and value-added services. It will be an industrial park, where world-class infrastructure, global ideas, and human talent converge to offer multinational companies the possibility of a long-term plan to ensure their future growth.

One of the first global companies to establish itself in this free zone is OKAY Industries, which specializes in manufacturing high-precision metal and plastic components used in various surgical procedures to improve patient lives around the world. The growth and expansion process for Okay Industries, which has operated in Costa Rica for 10 years, includes more than 10,000 m² (107,600 ft²); the expansion will add clean rooms, greater assembly capacity in molding areas, and metal finishing processes, and is on track to create 200 new jobs.

Alvaro Carballo, President of Code Development Group, assures that, "Evolution is committed to being a community-integrated free zone, with global standards that improve the quality of life and wellbeing for inhabitants in the western region of Alajuela."

Currently, more than 60,000 people commute from this western region to work in other areas of the country; for this reason, the project has a goal of creating stronger roots and economic wealth for the region.

Rodrigo Chaves, the President of Costa Rica, stated, "We promised to remove obstacles and eliminate unnecessary procedures that not only affect investors’ bottom lines, but also delay the development of communities, such as those in western Alajuela province, which is full of talent and technology eager to be deployed and to contribute to the country’s [growth] through their knowledge. That is why today, thanks to the efforts of all those involved, we can tell you that we have delivered.”

Jorge Sequeira, the Managing Director of CINDE, mentioned, "this announcement is another example of the western region’s development in recent years, with which it has positioned itself, once again, as a hotspot for investments outside the GAM. This is possible, thanks to coordinated efforts between real estate developers – such as the CODE group, local governments with support from FEDOMA (Western Federation of Municipalities of Alajuela), and institutions like the INA (National Institute of Learning) and ICE (Costa Rican Institute of Electricity). At CINDE, we are committed to regional development and will continue to support all projects that create better opportunities for our entire country.”

The Free Trade Zone regime plays a core dynamic role within the country's economic system and has a multiplier effect in terms of employment. During 2021, the sector created almost 188,000 jobs and represented 12% of Costa Rica's Gross Domestic Product (GDP), with an absolute contribution of US$7.23 billion.

In addition, free zones have a positive impact on small and medium-sized enterprises (SMEs) in Costa Rica, through the transfer of technology, knowledge, and best practices, as a result of the commercial relationships they share. This is a successful model that creates 11,000 production chains and local purchases of US$3.1085 billion.

Human Talent and Social Impact
As its name suggests, the Evolution Free Zone hopes to develop, transform, and create both growth and new opportunities for the communities in Alajuela’s western region, which has human talent of an outstanding technical and professional level.

Consistent with its vision for Sustainability and Corporate Social Responsibility, the Evolution Free Zone has been working with the communities, primary schools, high schools, and organizations in the areas of close proximity to the future technology park. In recent months, very positive meetings have been held with Development Associations, educational centers, local governments, and neighbors, to understand their realities and seek future activities for the common good, in order to contribute sustainably to these communities.

According to Alvaro Carballo, "with its social projects and economic impact, the Evolution Free Zone will mark a before and after for the western region of Alajuela." Working with local communities is one of Evolution’s priorities, which is why a community relations program is already being developed; it is called "Evoluciona" and will make it possible to boost the Western region significantly, with a long-term vision for the wellbeing of Grecia and its inhabitants.

Carballo explained that they are committed to promoting and enhancing human resources for the region’s technical and academic development, to meet the increasing demand for talent, as more companies populate the Evolution Free Zone.

This free zone also aspires to become a park focused on environmental sustainability and based on this goal, it has hired the country’s most experienced engineering team, in terms of construction for world-class industrial buildings and intelligent environments that operate under the highest global standards.

The technology park will be surrounded by green spaces that offer a balance with nature, a reduced carbon footprint, water reuse, use of alternative energies, recycling, and good waste disposal after productive activities.

Within this setting, Evolution Free Zone intends to integrate education, production, and the environment, focused on sectors that are potentially more attractive based on the changes that Costa Rica is experiencing in terms of competitiveness, such as smart manufacturing, life sciences, electronics, and value-added services.