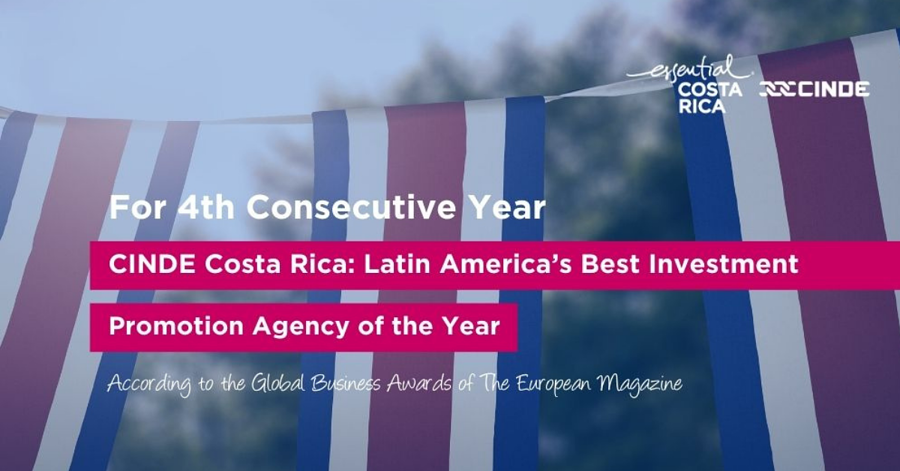 October 16th, 2020. Costa Rica received another international acknowledgment, thanks to The European’s "Global Business Awards 2020,” which recognizes several national and international companies and organizations in business, finance, foreign investment, among others. In its latest edition, the international magazine named CINDE, the Costa Rican Investment Promotion Agency, as Latin America’s Best Investment Promotion Agency of 2020, for the fourth consecutive year.

Additionally, CINDE received two awards: one for the Best FDI Impact Performance in LATAM and another for Investment Hub for Technology Operation andamp; Innovation in the region.
The magazine details, “The European continues with its annual recognition of excellence across the world of commerce. As the world changes year after year, companies are realising that success is measured beyond the balance sheet. Along with product innovation, positive contributions to society and sound stewardship of the environment are becoming the benchmarks by which results are judged. In the following pages we highlight the companies and individuals looking to realise a vision for better business.”

CINDE celebrates these recognitions, which reflect the daily efforts of its team, which works to promote and build Costa Rica’s foreign direct investment and to create high-quality and formalized employment opportunities for Costa Ricans. In its 38 years, the non-profit organization has attracted more than 300 corporations specializing in high-tech sectors such as Life Sciences, Advanced Manufacturing, and Corporate Services, and which today employ more than 180,000 Costa Ricans.

The European’s recognitions complement others, such as that from Site Selection Magazine, which in 2019 classified CINDE as the best investment promotion agency in Latin America and the Caribbean, as well as it acknowledgement as the Best Investment Agency in the World, according to the United Nations International Trade Center (ITC).

The European's Awards to CINDE: