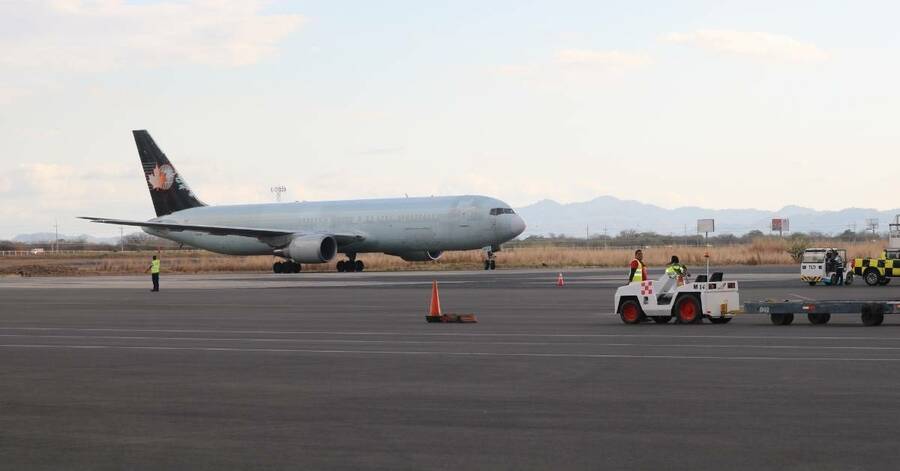 Guanacaste, Costa Rica, April 25, 2022. Within the context of a challenging global environment, several public and private institutions have worked together to search for and create mechanisms to increase the country’s competitiveness. One of the result of these efforts: The Guanacaste Airport, also known as the Daniel Oduber Quirós Airport or the Liberia International Airport, has received its first cargo aircraft for imports and exports, which will transport products and raw materials for the advanced manufacturing and medical device sectors.

With support from the Ministry of Foreign Trade, CINDE (the Costa Rican Investment Promotion Agency), the General Directorate of Civil Aviation, the General Directorate of Customs, and SENASA (the National Animal Health Service), arrival was coordinated for the first cargo plane, which marks a milestone in the airport’s logistics – and a competitive advantage for the Guanacaste region. Thus, this operational expansion, now reaching beyond tourism, proves to be a strategic point in meeting the requirements necessary for the import and export needs of several sectors, including those that are highly sophisticated and in high global demand, such as electronic components; in turn, this will contribute to creating new opportunities for economic reactivation in the region.

Jorge Sequeira, the Managing Director of CINDE, commented, “In a global context, where value chains have been redesigned and the geopolitical situation creates new opportunities, it is imperative for Costa Rica to be equipped to take advantage of these via larger and better platforms that increase our connectivity. Thus, we can enhance our strategic geographical position and the quality of our talent, in the production of components that are highly complex and have a large and rising global demand, such as electronics and medical devices, whose exports grew 33% and 37%, respectively, in 2021."

Considering the installed capacity of the Guanacaste Airport, as well as the strengths identified in the area, a corporate business group formed at the end of 2021; it is comprised of more than 15 companies from various sectors, including G-RAU Group, Intel, ICU Medical, Terrapez, Martec, Truchas Reales, Coca-Cola Industrias, HA Logix, Logitsa, Expeditors, and Solarium, among others. This groups’s objective was to achieve greater airport use, by consolidating its position as a cargo center and thus creating a positive impact on the business climate, which then translates into development for the Costa Rican population.

In this regard, César Jaramillo, General Manager of the Guanacaste Airport, stated, “We have demonstrated that Guanacaste is both in the position and ready to grow in cargo transportation. This region has grown with regard to attracting investment and the Airport, as a development engine, puts our cargo terminal at the service of the country.”

In 2012, the Guanacaste Airport received an initial investment of $35 million to build a new terminal; later, an additional $10.3 million investment was added to expand its capacity of passenger services. In addition, since 2018, it has a fully equipped cargo terminal, which, to date, has been primarily focused on transporting fresh produce from the region.

Alvaro Vargas, the Director of Civil Aviation, stated that, “The General Directorate of Civil Aviation is very pleased to have collaborated with the private sector, CINDE, and PROCOMER on the business group’s decision to transport cargo of differentiated goods and of high unit value through the Daniel Oduber Quirós International Airport, in addition to identifying business opportunities and promoting the development of new air cargo routes in strategic locations and close to economic centers.

“Without a doubt, our Airport has been a catalyst for the regional and national economy, which challenges us to continue making efforts to adapt our current capacities to the growing demands posed by various economic sectors, via the development of infrastructure and logistics platforms that provide companies with competitive advantages, efficiency, and security.”

This first cargo flight is a clear and convincing sign of the capacities and conditions that Costa Rica offers to guarantee supply chains and foreign trade flows, making it an ideal location for nearshoring. It is also a good step toward providing greater logistics resilience to the country’s commercial ecosystem, which UNCTAD recognized as the least volatile export environment in the Americas in 2021.

Andrés Valenciano, the Minister of Foreign Trade, expressed his pride in the joint effort and mentioned that “Dispatch of the first cargo flight, loaded with advanced manufacturing products and medical device exports from Guanacaste, is not only a milestone for the Chorotega region; for Costa Rica, it is also a decisive step in the right direction. This work is a coordinated effort by the foreign trade sector to promote initiatives that continuously and sustainably improve our country's competitive conditions. Now, we have a window of opportunity to continue attracting and retaining the investments and jobs that are created in our country”.

In addition, he highlighted, “COMEX will continue to provide all necessary support, so that this valuable initiative strengthens all trade operations that converge in Guanacaste, to help them develop from an interrelated business facilitation approach, thus making all control processes more agile and effective, and saving time and resources for both Costa Rica and foreign trade operators.”