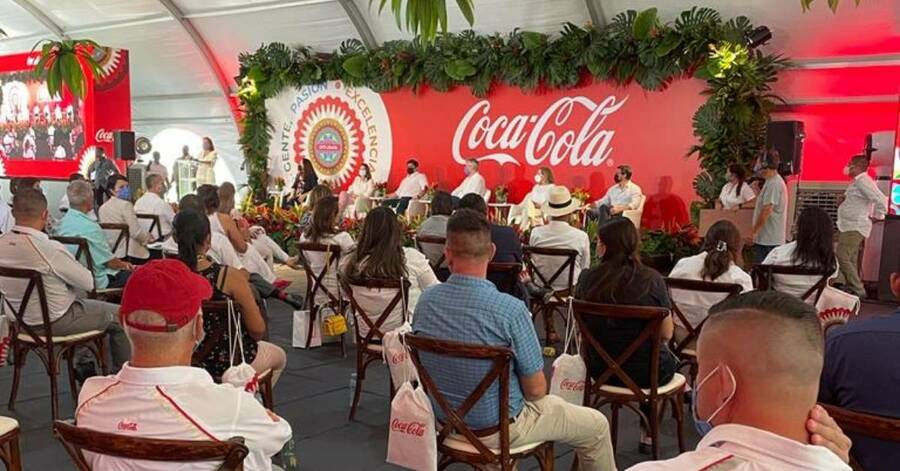 The announcement was made this Thursday during a visit by the President of the Republic, Carlos Alvarado, the First Lady, Claudia Dobles, and the global Coca-Cola CEO, James Quincey, who toured the facilities of the most modern Coca-Cola plant in the world.
Mr. President emphasized that this new plant would boost territorial development and generate jobs.

“I would like to express my gratitude for the decision by this prestigious company to expand its presence in the country and to establish the most modern infrastructure at the world level in Costa Rica. This will doubtlessly have a significant impact on local economic development and confirm that Costa Rica continues to be a very attractive option for investment”, he added.

From the plant for concentrates and bases for Coca-Cola beverages in Liberia, the concentrate is exported to Central America, the Caribbean, and other countries in Latin America. The facilities produce 164 formulas for different beverages that are owned by the company, including the famous Coca-Cola.

Information released by the Foreign Trade Promoter (Procomer) places Coca-Cola in first place in exports in the food industry as well as the third exporter at a general level in Costa Rica.

The current production volume at the plant in Liberia is greater than what is produced by the previous plant which is located in La Uruca, in San Jose. Since it began its operations in 2020, Liberia has significantly increased its production as the plant finished implementing its projected capacity.

“The start-up of operations in Liberia has made it possible to add service to new markets. The company continually evaluates the opportunities to improve its supply chain and operations in Liberia and has been called to become a key stakeholder,” pointed out William Segura, the Public Affairs and Communications Manager for Coca-Cola for Central America.

The Coca-Cola location in Liberia, Guanacaste, is strategic since it provides a series of logistical pluses for operations such as its proximity to the international airport, the speedy land journey toward the northern region of Costa Rica, and a good connection to access the primary ports.

Exporting knowledge
There are 130 people who work directly for Coca-Cola industries in roles that include manufacturing and logistical operations, as well as in the areas of the laboratory and maintenance, finances, and human resources.

The plant has a broad diversity in terms of human talent, generations and staff with experience; in addition, it maintains a split that is very close to 50/50 between male and female talent. This is a very diverse team where the strong presence of the millennial segment is outstanding.

“A large part of the human resources that we employ is primarily from the area. We use that to generate a series of skills for people who are originally from Guanacaste, who in the future may turn into leaders of one of the 18 concentrate plants that Coca-Cola has in the world. This is a model plant because it is one of the most technologically advanced that the company has built over the last 10 years in the world,” indicated Mr. Segura.

In Liberia, Coca-Cola incorporates intelligent technology with advanced techniques related to manufacturing, robotics, the Internet of things, analysis, and process automation. This has facilitated not only digital integration for decision-making based on relevant information but also building human resource capacities. The goal is to develop and transfer that knowledge, to share practical upgrades, and to have a positive impact on the ongoing improvement cycle for the organization at a global level.

With this plant, the company is also contributing to expanding local economic activity, with a highly integrated and connected industrial operation that engages in new capacities, both for human teams that are working directly as well as for service providers.

About the Coca-Cola Company
The Coca-Cola Company (NYSE: KO) is a full beverage company with a supply that exceeds 500 brands that reach consumers in more than 200 countries and territories. In addition to the Coca-Cola brand beverages, our portfolio includes some of the most valuable beverage brands in the world, such as beverages based on AdeS plants, Ayataka green tea, Costa coffee, Dasani waters, Del Valle juices and nectars, Fanta, Georgia coffee, Gold Peak teas and coffees, Honest Tea, Innocent juices and smoothies, Minute Maid juices, Powerade sports beverages, Simply juices, Smartwater, Vitaminwater, and Zico coconut water. We are continually innovating our portfolio through actions that run from decreasing the amount of sugar that our beverages contain to introducing new products to the market. We are also working on reducing our environmental impact by resupplying water and promoting recycling. Along with our bottling partners, we provide jobs to more than 700,000 people, providing economic opportunities to local communities around the world. If you would like more information, visit Coca-Cola Journey at www.coca-colacompany.com, and follow us on Twitter, Instagram, Facebook, and LinkedIn.